Hey every douchebag guy I’ve ever met at any bar ever – this entry is for you.  Perhaps you met me; you fancied my wit and charm, you found my adult acne endearing, and the way I shoot whiskey like water downright impressive. I can’t say I blame you. Maybe for a split second in time you will think you have met your match, a girl who can hang with the boys, who enjoys shooting guns and shotgunning PBR. But when you find out the biggest thing we have in common is that we both like chicks, our immediate connection suddenly fizzles like a wet firecracker. Most of the time these guys go respectfully back to their circle of friends with their tail discretely tucked between their legs, but every so often you get that one penis-brain who wants to ask you like, a million questions; all of which are undeniably inappropriate and overwhelmingly annoying. Here are some of my personal favorite gems: 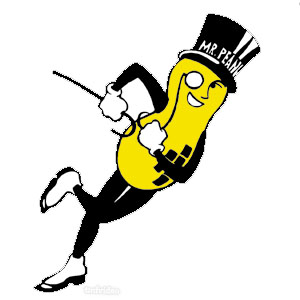 Well if you’re referring to a guy named Richard, who maybe goes by Dick that I once knew, who moved far away or something – I guess you could say I miss dick. However if you’re referring to the dangly thing between your man legs, than no, I definitely don’t miss that. Guys talk about their penis like it has personality; like it wears a little top-hat and cane like Mr. Peanut and soft-shoes around with a monocle. Perhaps if this was the case, I would at least be friends with a dick or two because that’s got the curiosity of an ‘Alice in Wonderland’ character.

Here’s the funny thing, I have met the greatest guys; but at the end of the day –  I just want to kick their ass at Halo, and be the Sally to their Harry but without all the messy emotional entanglement at the end. Yes, I have dated men in the past. No, it didn’t work out. Why not? Oh, because I’m gay. And being gay is like, an actual real thing – as real as the sun burning in the sky, as legit as the eyes you’re using to read these words (unless of course you’re Helen Keller), and as concrete as motherfucking unicorns.

Well that’s interesting because you don’t look someone whose brain was replaced with a squeegee during an experimental surgery or like someone with a complete lack of aptitude for social normalcy but here we are.   What am I supposed to look like? Should we go into the bathroom with a pair of shears and trade in my long blonde locks for a dyke spike? Maybe put on some Indigo Girls and go for a mushroom cut if we want to channel a look more akin to dykes of the early 90’s? Dykes are everywhere, man. There’s a good chance that the hot girl you were checking out at the mall today? Totally gay for girls.

“Whose the dude in the relationship?”

Well due to the fact we both have boobs and an obvious lack of a penis, I would go ahead and say “neither.” There are no dichotomous roles that need to be filled in any relationship; heteronormative or not. Sometimes in a straight relationship – the guy may be more emotional than his X-chromosomal counterpart, but that doesn’t make him “the girl.” And just because one partner may appear more physically masculine in a same-sex female relationship, that doesn’t make her the “dude,” dude.

“How do lesbians have sex?”

Lesbians have sex a hundred different ways, and we’re probably better at it than you. We don’t need toys or detachable penises to make it happen either. And yes, it qualifies as “real” sex. I always tell people – if you feel like you got fucked, you had sex. (per my entry: Bitches Get Shit Done)

So if you’re one of “those guys,” and you’ve found your way to my blog because you googled “something or other about lesbians” and somehow ended up here; I’m not sorry. I hope that like Mr. Rodgers in putting on my cardigan and loafers, you’ve learned a little something today and you don’t ever make it anything other than a beautiful day in my gayborhood.

Thirty-something riding the turbulent train of human emotion. Living with my cat, my Chihuahua, and what's left of my dignity.